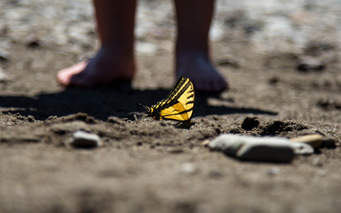 There’s a founding concept of chaos theory that has been coined the “butterfly effect.” The term was coined by a Meteorology professor named Edward Lorenz who claimed that the simple flutter of a butterfly’s wings could ultimately cause a tornado. He came about this idea by plugging information into a computer program that was designed to predict weather patterns months in advance. The program took into account a number of variables such as wind speed and temperature. While repeating a simulation he’d run earlier, he decided to round off a variable to one one-thousandth of its actual number. This miniscule change in only one of a dozen variables altered the findings of the simulation drastically. Basically, it is impossible to predict the future because the tiniest event could alter the fabric of that future in ways we can’t even imagine.

Chaos theory fascinates me. The butterfly effect is a daunting prospect. Every individual action we take resonates across existence. No pressure. There are stories of people who were supposed to be on the planes or in the buildings on 9/11. Random, seemingly innocent events changed that. One woman stepped out of the World Trade Center tower for an unscheduled cigarette break only to look up and watch a plane destroy the floor she’d just left. One flight attendant made an error on her keyboard and was not able to be on flight 175 as she’d requested. That flight attendant is now a cardiac nurse. How many lives has she saved? How many of those lives will go on to create new lives? How many of those lives will be involved in curing cancer, feeding the hungry, or saving the lives of even more people?

I’ve had my own experiences with chaos theory. I once ate a cheeseburger from a certain fast food establishment that specializes in Hot Eats and Cool Treats. The pickles tasted funny, but I was hungover and hungry. What if I hadn’t had drinks the night before? What if I took two seconds to remove the pickles from the burger? What if I’d driven three minutes the other direction to eat Arby’s? The chaos that ensued a few hours later would not have happened. I was previously unaware that a person could evacuate all bodily fluids from both ends simultaneously. I was also unaware that I was religious enough pray for a quick death. If you tell yourself that my experience was not as life-changing as those survivors from 9/11, you’ve never had food poisoning.

I’m friends with a woman whose mother got pregnant with her at a young age. The grandmother insisted on an abortion. The mother backed out at the last minute and my friend is now a member of this world. She has children of her own. What will her children go on to do? How will her children’s children go on to affect the lives of thousands of others? In what ways will those thousands of others go on to shape existence because of their interactions with a few? I am by no means trying to (nor will I) get into a pro-life/pro-choice debate. I have no business as a human being telling anyone else what to do with his or her body. I only know for myself that I have laughed and had incredible conversations with a woman who was never supposed to exist.

Chaos theory is something with which I can really get on board. I embrace that nothing is set in stone. It suggests that every second is full of possibility. And I don’t have to go big to make an impact. I can hold a door. I can smile at a stranger. I can listen and ask questions to my daughter as she explains how hilarious the latest YouTube video from LDShadowlady was. I guess I had to be there. The point is that the smallest gestures can ripple through eternity.

A Facebook friend of mine posted a video a couple days ago that encapsulates the potential of these small gestures. This is the link to that video: https://youtu.be/jVyPq82Z1z0

I have no idea what my mark will be on this world. I have no idea if I’ll even leave one beyond the moment I stop breathing. What I do know is that I have infinite opportunities to do so. Bring on the chaos.